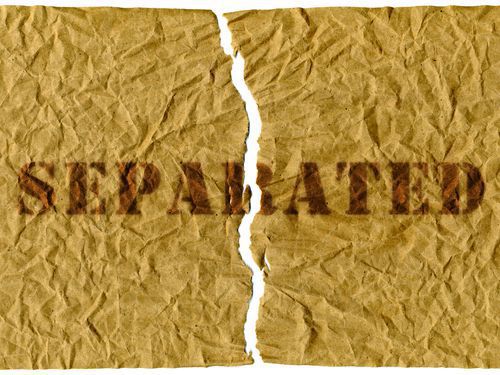 How do I prove separation from my spouse in North Carolina?

In a previous blog post, I briefly discussed what being “separated” means in North Carolina in describing what dating and sex look like after separation. I explained  that North Carolina requires spouses to live ‘separate and apart from each other’ with at least one of them intending to end the marriage. Where you live makes a difference. You have to live in a separate residence — not in separate rooms of the family house, and not even in a separate apartment over the family garage — but in an entirely separate location. In other words: [1] separate residence, and [2] intention to end the marriage. You do not have to file a legal document to begin a separation, although some people prefer to do so.

It seems simple, doesn’t it? Moving out and proving your, or your spouse’s, intention to end the marriage couldn’t be all that difficult, could it? In most cases, proving separation is not difficult because both parties have agreed upon and acknowledged the date that one of the parties vacated their shared residence and that at least one of them made it crystal clear they did not intend to move forward with the marriage. However, there are other circumstances that are less common that need further examination and explanation.

What if I haven’t lived in the same residence as my spouse for most of our marriage?

The truth is that not all married couples live together during marriage. In some cases, there are immigration issues that prevent one spouse from living in the same country as his or her partner. I have also seen work obligations require spouses to live in completely different states, or even different countries, for much of the year. In these cases, the first prong or our separation test is almost always already met because there is already physical separation. Under these circumstances, the vast majority of the focus is on the intention of a party to end the marriage, our second prong. The following are some of the questions that should be asked when determining whether or not there was an intent to separate: (1) did one spouse communicate to the other his or her intention to end the marriage?; (2) is there still a sharing of expenses, joint bank accounts, and a continued intertwinement of finances?; (3) is the couple still holding themselves out as husband and wife? For example, do they attend events together and introduce one another to third parties as their significant other?; (4) how much time, if any, is the couple spending together? Are they taking three-week vacations in Europe together or do the see each other rarely and only out of necessity?; and (5) has either spouse starting dating someone new and, if so, how public is his or her relationship? Is the new happy couple making regular public outings, posting on social media, and openly holding themselves out as a couple? In these cases, actions often speak louder than words. For example, it is generally not sufficient evidence of intent to separate for one spouse to say that he or she communicated his or her intention or desire to separate to the other party. After all, how many times have couples been in a fight and made similar comments in anger without any real intention of ending the marriage? The Court will closely examine the behavior of each spouse, both toward one another and toward the rest of the world.

What if we continue to go to marriage counseling and/or take vacations together?

North Carolina law encourages couples to continue to work toward reconciliation during the separation period. Isolated attempts at reconciliation are not, in themselves, considered a reconciliation which would toll the time on the one year of separation required prior to obtaining an absolute divorce. So, go to therapy and have a weekend getaway to try and reignite the passion in your relationship! However, be careful to consider the answers to the questions above and look at your situation in its entirety before booking your flight!

How do I prove separation in North Carolina?

At Dozier Miller, we have 10 family law attorneys handling family law matters in North Carolina. If you find yourself facing a family law matter, including a dispute regarding the date of separation, contact a member of our family law team today and schedule your initial consultation.